"One of history's darkest moments takes on a poignant immediacy when you walk through the cities, towns, and buildings where the events occurred. At the Anne Frank House in Amsterdam, the Jewish Museum in Berlin, in the Warsaw Ghetto, and at the camps of Auschwitz and Birkenau, you have the opportunity to recall the suffering, honor the victims, and celebrate the liberation (EFTours)." 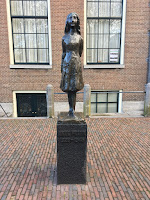 Memorial to the Murdered Jews of Europe

(Pictures from when I traveled with my mom last April)